So many times people will refer to the need for ‘BA’ or ‘Breathing Apparatus’ without making any distinction as to which type is needed or somebody will just make a vague reference to an entry that requires breathing apparatus.

It might just be a safety advisor who said that you should consider the use of ‘BA’. In many cases you may be left wondering – well great, but what type of Breathing Apparatus?
First, it’s good to consider why we use breathing apparatus. Breathing Apparatus, or supplied air as it is sometimes known as, is used where the atmosphere is not suitable to be breathed. Mainly it is used where a filter mask or powered air filter system is not suitable, but sometimes other factors are involved.

There are 3 main types of Breathing Apparatus – Escape, Self-Contained and Airline. 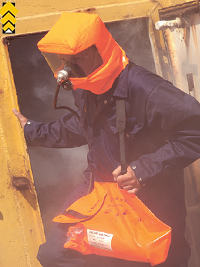 Escape Breathing Apparatus is used for self-rescue from an environment that has become hazardous after entry into it. The most common example of this in-use is in a confined space where there is no immediate danger from gas or oxygen deficiency but the risk of that danger remains, and so an Escape BA set is carried enabling the users  rescue themselves from a hazardous environment. An Escape Set consists of a small compressed air cylinder, either 2.0L or 3.0L in size, that feeds air into a face piece. Escape Sets are usually supplied with either a positive pressure close-fitting face mask or with a loose fitting hood. Regular users of full face masks will usually prefer the comfort and familiarity of a close-fitting face mask, whilst irregular users will find the loose fitting hood easier to don in an emergency situation. It is worth noting as well that a loose fitting hood accommodates users with facial hair and glasses. 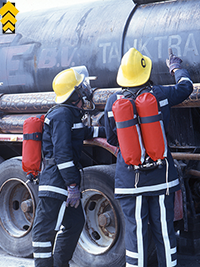 Self-Contained Breathing Apparatus (SCBA) or Compressed Air Breathing Apparatus (CABA) is used for entry into a known hazardous environment. One user we will all recognize is the Fire Services, who use SCBA to enter areas where smoke and noxious gases are present, but SCBA is used in many entries where there is a toxic gas, asphyxiate or oxygen deficient environment. A SCBA set consists of 3 main components – a cylinder of compressed air, a back-plate that holds the cylinder and reduces the air from high pressure (200-300bar) to medium pressure (5-11 bar) and this in turn supplies a face mask. Self-Contained BA gives autonomy to the user, meaning that they can move around freely as opposed to being attached to an airline. However, the disadvantages are that the cylinder has a relatively short supply time, for example a 9.0L 200 bar cylinder giving a usage time of 35 minutes, and also the cylinder means an increased size and therefore can hinder ease of movement through tight spaces. There are many different sizes of cylinders which can improve duration or maneuverability, but these limitations will still remain to some extent. 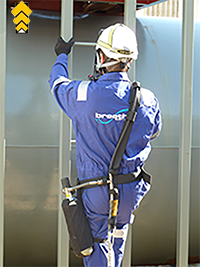 Airline Breathing Apparatus is where the air supply is removed from the user and they are fed compressed air via an airline. The compressed air source should deliver them air that has been air quality tested to EN12021, and may be supplied from a cylinder bank or breathing air compressor, which may be either fixed or mobile. The airline supplies the user's face mask through an airline harness. An airline system often incorporates an escape cylinder which the user wears to ensure that in the event of the main air supply failing they have a short duration air supply to allow to self-rescue themselves safely. Airline systems are used where the work is relatively localized and likely to be for longer durations. The main disadvantage of being attached to an airline is that it restricts easy movement, and poses a risk of entanglement. However, by being attached to an airline the user can work for as long as is comfortable and safe for them in the environment they are in without the requirement to refill or change a cylinder. A very good example of where an airline system is relevant is tank cleaning. A large tank may take several days or even weeks to thoroughly clean, so an airline breathing apparatus may be required in this one area for long durations. Particular attention should be paid to selecting a suitable air supply source for the work site and the table below gives a quick start guide.